A Japanese “flying car” has successfully made its first test flight 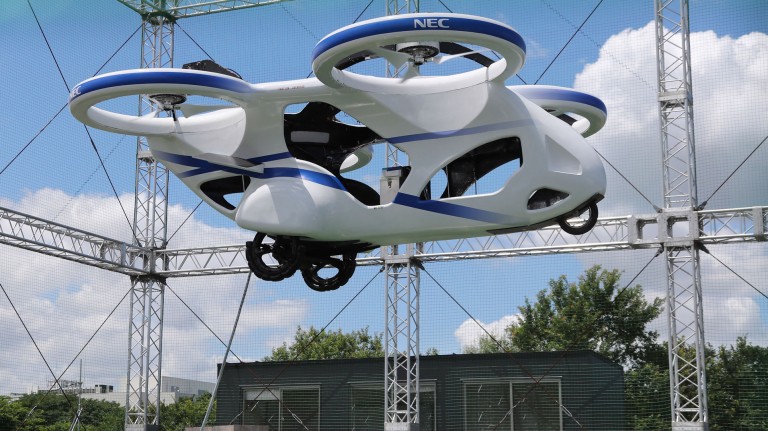 Companies around the world are racing to be the first to launch self-flying vehicles.

The news: Japanese electronics giant NEC tested a drone-like prototype yesterday inside a cage at one of its facilities in Abiko, Japan. It hovered about 3 meters (10 feet) above the ground for a minute. It didn’t have any passengers on board and was powered by a battery, Bloomberg reports. NEC engineers spent about a year developing the model, which weighs about 150 kilograms (331 pounds) and is 3.9 meters (12.7 feet) long.

What do we call it? “Flying car” is a bit of a misleading name, given that it can’t go from driving on roads to flying. It’s basically a large drone, with four propellers, that can carry people.

Japan’s grand ambition: Japan’s government is hoping to position the country as a leader in the flying car not-quite-as-large-as-a-helicopter drone space. Its “road map” document says it plans to ship goods this way by 2023 and let people ride in the vehicles in its (very densely populated) cities by the 2030s.

One of many: A number of companies, including Boeing, Airbus, and Uber, are working on autonomous flying. It’s not quite clear who the target market is yet, though, beyond the super-wealthy, not to mention whether driverless “flying” taxis will be economically viable.

Read next: When will we have flying cars? Maybe sooner than you think.

Sign up here for our daily newsletter The Download to get your dose of the latest must-read news from the world of emerging tech.