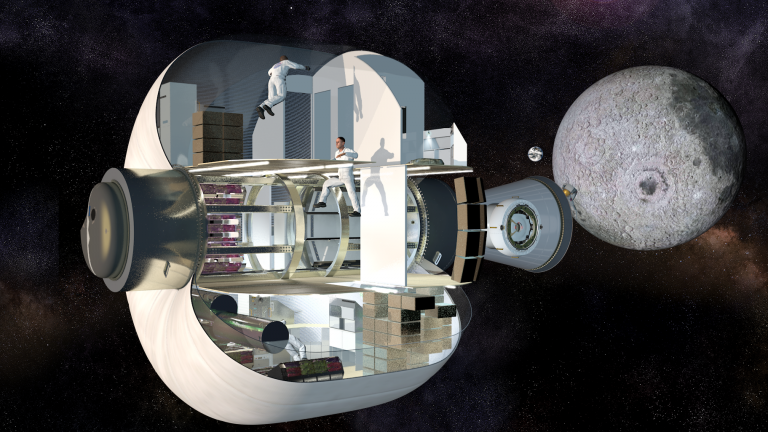 American aerospace company Sierra Nevada has unveiled a full-scale prototype for a brand-new inflatable habitat that could be home to future astronauts living and working in deep space.

What is it? The module, which was unveiled at Johnson Space Center in Houston on Wednesday, is 26 feet (8 meters) in diameter and has an internal volume of about 10,000 cubic feet. In the three-floor design, the first floor is for food and equipment storage; the second floor houses the farming module and laboratory instruments for experiments, and the third floor is for sleeping and dining.

Why build it? The new model is just one-third the volume of the International Space Station, but the ISS was built from multiple pieces that were launched and assembled separately over the years. An inflatable module can be compressed and stored in a single launch payload, and then deployed and expanded in just days. Sierra Nevada’s module is made of vectron, the same lightweight material that is used to make bulletproof vests, and can shrink down to about a little less than 10 feet, easily fitting the payload fairings of most heavy rockets.

What’s next? In 2016, NASA selected Sierra Nevada as one of six aerospace companies to build and test small space habitats for its Lunar Gateway project, a space station that would operate as a jumping-off point for future missions beyond the moon. Northrup Grumman was given a contract to actually build its module, so it’s unclear exactly what Sierra Nevada will do with its module now.

It might work as an ISS attachment (like Bigelow Aerospace’s BEAM expandable module). Alternatively, it could be used in a new low-Earth-orbit station, or it could still play a role in journeys to the moon or Mars.

The Airlock, our space newsletter, is coming back soon! Get ready by signing up for free here.